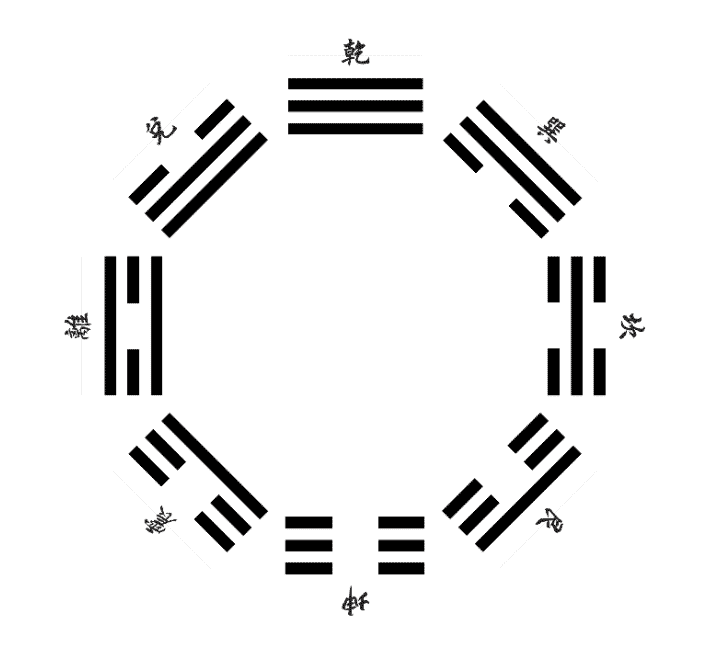 Ba Gua, the eight trigrams, are denoted by symbols named 爻 (Yáo). 爻 is drawn as an odd diagram (奇畫, also referred to as the Yang symbol, 陽爻) or even diagram(偶畫, also referred to as Yin symbol, 陰爻). Combined in pairs represent 四象 (this can relate to the four directions or the corresponding mythical beasts, or each corresponds to two of the eight trigrams, 太陰, 少陽, 少陰, 太陽, grouped by the composition of Yin and Yang). With an additional symbol, the diagrams consisting of three symbols make the Ba Gua. The three symbols correspond respectively to “sky above, earth below, and human in the middle.”

Bā Guà Zhǎng is believed to have been developed by 董海川 (Dǒng Hǎi Chuān) in the 清 (Qin) dynasty. During a journey to the southern side of the long river (江南), it is said that he acquired inspiration from Taoist ideas, and subsequently integrated his martial art experiences to construct the palm set. He had been employed at an official residence of a prince (肅王府), and the system therefore first spread around Bei Jing.

You can learn the Ba Gua Zhang Palms in our online academy!

2 thoughts on “Ba Gua Zhang – Palms of the Eight Trigrams”