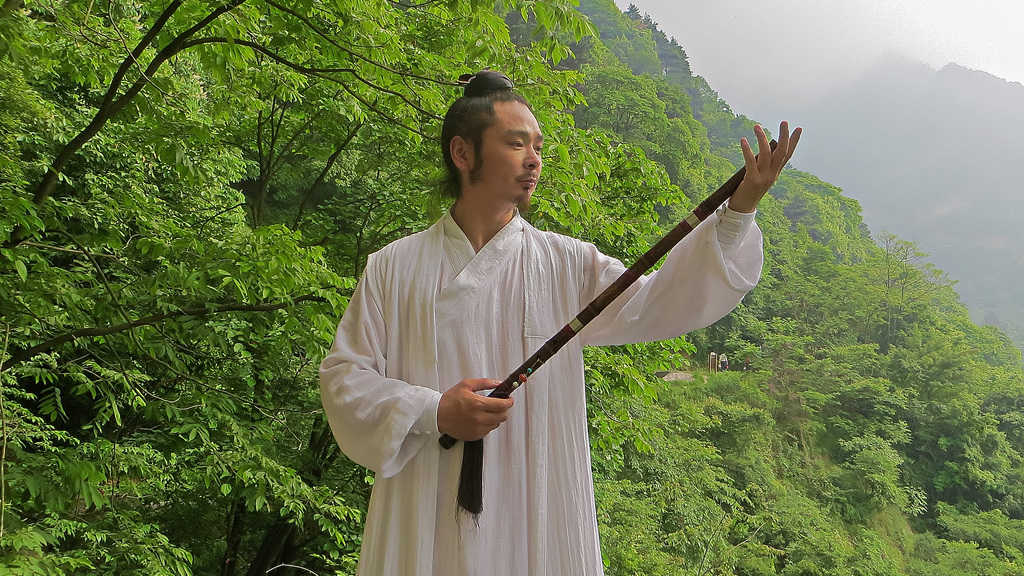 The Wudang Daoist Martial Arts Academy is located at the Temple of the Returning Dragon (Huilong Guan 回龙观), high up in Wudang Mountains. It was founded by Master Chen Shiyu in 2007. Master Chen Shiyu has been training in Wudang Shan for over 20 years and is a 15th Generation Master of Zhang San Feng Wudang Kung Fu. We are a small school and have a peaceful environment here. Here we live a Daoist way of life and strive to be close to nature. Our school is somewhat hidden, and no tourists come here.

We accept students that are coming short term, and those looking for rigorous traditional programs that last several years.  Our school typically has less than 30 students in total. We welcome people of all ages and ability, only we wish that they strive to work hard to discover the true Wudang Kung Fu.  Our method of training is traditional, which can be difficult but very effective for hardworking students. We hope that students who come here can strengthen their body, learn techniques for inner cultivation, and come to a deeper understanding of traditional Daoist culture.

Master Chen Shiyu is the Headmaster of the Wudang Daoist Martial Arts Academy, and it’s the main instructor. He was born in Central China’s Hubei Province and now is a 15th generation Master of Wudang Daoist Kung Fu.

Master Chen Shiyu showed great interest in Wudang Kung Fu. In 1993, he left his hometown and came to Mt Wudang. He learned martial arts from different teachers for some time and then he was honored to have Grand Master Zhong Yunlong as his teacher. The Daoist Master Zhong is the 14th generation successor of Wudang Wushu of Sanfeng branch. He saw that Shiyu was very hard working and has an honest and simple mind, so he chose him as one of the closest disciples in 1996. Since then, with the strenuous cultivation from Master Zhong, Chen Shiyu has attained Internal Wudang Kung Fu which was in the past not easily spread out. All his Gongfu styles include Wudang Tai Chi, Eight Immortal, Taiyi, Bagua, Xuangong, and Xingyi and many methods of Daoist health-preservation.

Master Chen Shiyu vows to bring Wudang Kung Fu to high development, let more people understand it and wishes every lover of Wudang Kung Fu to be healthy in body and heart; succeed the Tradition and bring it to the world.

If you would like to explore Wudang Daoist Kung Fu, you are invited to come to Huilong Temple to study with Master Chen Shiyu!

Wudang Kungfu is one of the two major families of Traditional Chinese Martial Arts, the other being Shaolin.  It is an internal style, meaning that not only does it require great physical strength and fighting ability, but it also has a strong focus on using the mind, and one’s “Qi”, to cultivate and control the body. Its purpose is threefold: it is an effective combat technique, it is a form of body and mind cultivation, and it is an art – containing thousands of years of traditional Chinese culture.

Wudang Kung Fu contains profound Chinese philosophical theories, combining the traditional concepts of Taiji (Tai Chi), Yin and Yang, Wu Xing (Five Elements), and the Ba Gua (Eight Trigrams) into boxing theories, boxing skills, exercises and attack strategies, all derived by studying the laws of life and nature. Wudang Kungfu (neijia quan internal boxing) is featured by overcoming motion with stillness. The opponent will be laid down the moment he attacks. In contrast, Shaolin is classified as external type boxing. Internal Gongfu was created by Zhang Sanfeng, a famous Daoist in the Song Dynasty. Wudang Kung Fu contains many skills and training methods designed for staying healthy and prolonging one’s life while at the same time comprising many effective fighting methods. It is not only one particular school of martial arts, but also a complete system for both self-defense and health preservation.

In Tai Ji, there is stillness in movement and movement in stillness. The two are interconnected and should not be separated. Internal power is through control of the mind. The concentration of mind moves the internal energy before any external movement.
Taijiquan is not simply the exercise for elderly, which is perhaps what is known to Westerners. It is, in fact, a combination of Yin and Yang, Tai Ji and Infinity. It is an art requiring perfect control of the mind. It integrates stillness and movement, from external to internal, from movement to stillness, from elementary to advanced, and merging stillness with movement. Taijiquan not only directs internal power to external movements, but it also combines the mind with breathing, resulting in good health and an art of combat applications.
There are 13 postures (8 hand/arm movements and 5 body movements) in Tai Ji. The 8 hand/arm movements: Beng, Lu, Ji, An, Zai, Lie, Zhou, and Gao. In simplified terms, they mean: ward off, pull back, push, press, oblique turning, twist, elbow strike, and shoulder strike. The 5 body movements are directional. They are: advance, retreat, shift to the left, shift to the right and stable equilibrium. The 13 postures are based on the 8 trigrams and 5 elements. Requirements include relaxing, body coordination, the concentration of mind, and stillness in movement.

Taijiquan is a stepping-stone to Daoism. In Daoism, one has to train one’s behavior and mind. It is important to keep a peaceful mind. Through meditation, combining Yin and Yang, and stillness in movement, the internal power will flow through the whole body achieving the ultimate aim.

Qigong is an ancient Chinese practice for cultivating the body energy, for the benefit of the physical body, mind, and spirituality. Qigong practices are varied. They include hard and soft qigong, healing qigong, and general conditioning qigong. Wudang Qigong is an “earlier heaven” method based on traditional Chinese medicine (TCM) principles and teachings. Qigong is a good practice for everyone, at any age to keep healthy in both body and mind.

People’s Life and Death, Connection to Life, Dao of Life, Dao of Cultivation, Beginning of Life, Stairs of Immortality.
The character sits in the heart. The initial spirit within the heart is sent out through the eyes. The character in the heart is moving like an ape.
The life lies in the kidneys. The initial energy within the kidneys is sent out by the root of excess and the character of heart. The thoughts are running like a horse.
This is called “xinyuan, yima”.
Take back xinyuan, yima will follow.

The ancient practitioners took back the heart and will, and stabilized the jing and nurtured the qi; made the qi of the breath like the wind and the qi of real yang like the fire. In practicing and heating, they transformed jing to qi, and qi to shen; let energy concentrate, and united with the nature of Dao.

The methods of practice are immeasurable, there are methods of movement, stillness, sitting and lying, but never stick rigidly to given patterns – you can hardly understand the everything.

We are proud to be located in the heart of the Wudang Mountains, at Huilongguan (Returning Dragon) Temple. Huilongguan is the first temple after passing the entrance to the National Park of Wudangshan. Our school is easily accessible by a frequent bus service that starts from the entrance of Wudang Mountains. This makes sight seeing of the many famous temples easy and shopping in the town center convenient.

Alternatively, you can fly to Shiyan airport, or take a train to Shiyan. There are more transport options to Shiyan. Note that Shiyan is located around 55 kilometers from Wudangshan, and transport cost upwards of RMB 250 to the school. Please call or email to confirm your time of arrival and the cost of transport.

All visitors to Wudangshan scenic area will need to pay the entrance ticket costing RMB 240with validity of 3 days. When you study at our school, we will arrange for a special permit to extend the validity of the ticket to 3 months, for an additional RMB 50.

Should you be training here for a longer period of time, the school will provide the necessary supporting documents and help you to extend your visa. Visa for martial arts training is valid for 3 months and extensible for up to 12 months. For multi-year stay, you will need to exit and re-enter the country every 12 months.

Being a small school, the school is able to offer traditional Wudang Kung Fu instead of commercial Wushu. Foreign students get the opportunity to be guided by Master Chen Shiyu, as well as other instructors. Learning directly from a highly-knowledged master, you will gain an in-depth understanding of Wudang Kung Fu and Daoist culture.

The Feng Shui of the school and training ground has been carefully planned. The training ground is encircled by the mountains and a beautiful bamboo forest. Surrounded by nature, the atmosphere is peaceful and quiet, benefiting Daoist Gongfu (Taoist Kungfu)
The school also makes use of traditional training equipment such as wooden post training, traditional weight training, and conditioning equipment.

Accommodation is comfortable with hot water facilities, a small shop and three meals a day prepared by the school cook. In keeping with Daoist philosophies, the food is primarily vegetarian, with some meat to balance your diet for the training.

Wifi Internet is available, so you can carry on with your existing work or communicate with those back home in your spare time. Note that some international websites are not accessible in China (Facebook, Google/Gmail, your bank’s website), so you are advised to have VPN connection before arriving in China.

The following items are provided by the school

You will need to bring your own toiletries and household items. The following are not provided by the school, but available for purchase at the school’s grocery store

The following are optional paid services

Support our traditional school and feel free to pin and share our pictures with your friends.

We are surrounded by mountains, and the school is located in a small village. The vegetables we eat come from the fields around the school. The school is an hour’s walk from town, with some steep sections. Alternatively, you can pay for the tourist bus.

There are green tea farms and ancient Daoist temples located near to the school.