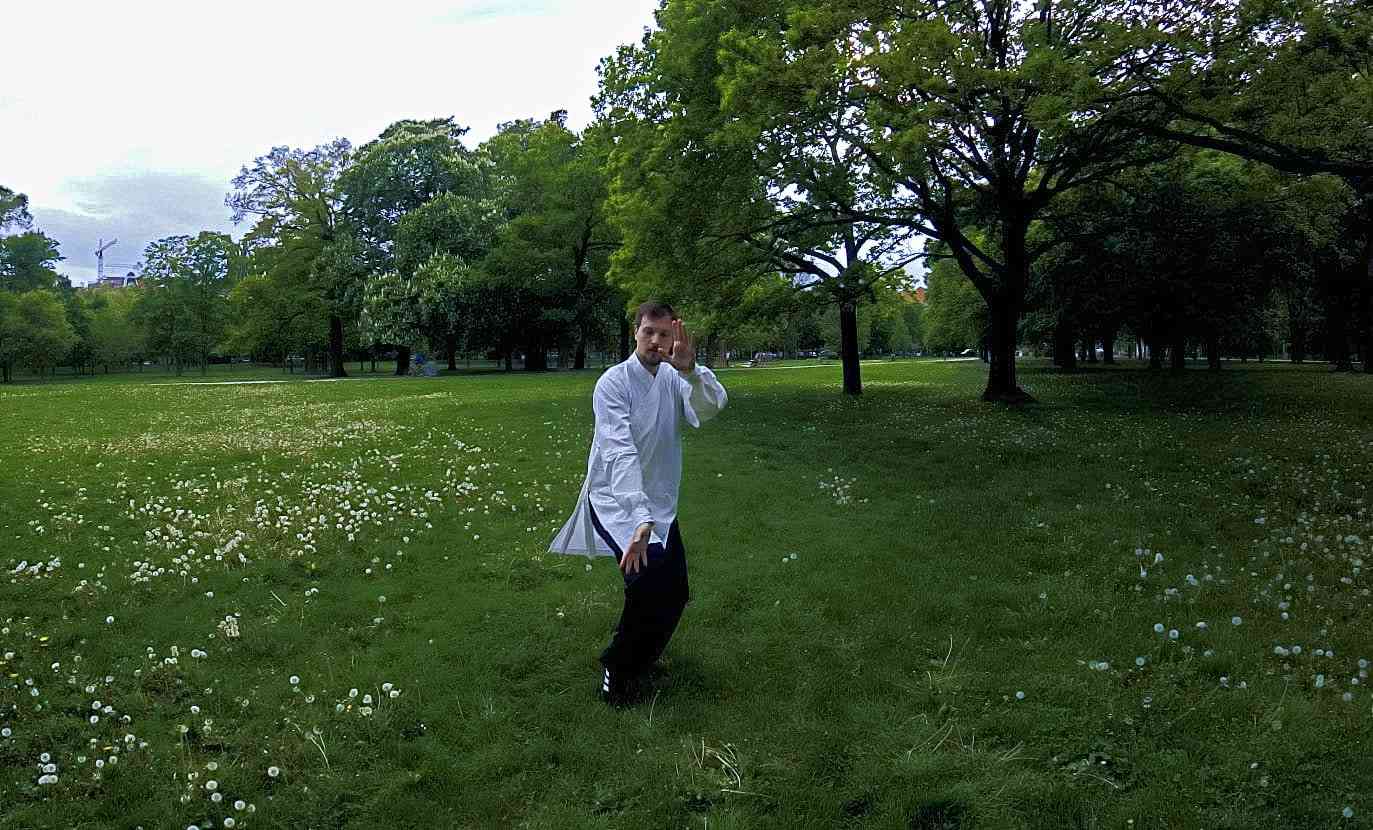 Fu Hu Quan (Taming the Tiger) is an older form which does not originate directly from Wudang. “Taming the Tiger” is a form taught between Daoists to protect themselves from robbers, the form uniquely developed itself over the centuries.

Fu Hu Quan was only taught verbally, like most traditional forms between Daoists. Therefore no list of the movement set was ever written. The reason for this is the personal development, the structure adapts to intuition, and the person changes the form. Fu Hu Quan might be the same name, but the quality of the form differs for each individual.

This individuality is important for the philosophy of the form. The main principle of Fu Hu Quan is to fight against a much stronger opponent – teaching the Tiger his limits.

Before we go into practical explanation I want to tell you about the emotional influence in Fu Hu Quan:

The Mentality of Fu Hu Quan

Like all oral forms, the mentality has a huge role in the development, that is why between Daoists the person was picked carefully before teaching, the personality had to be appropriate for Daoist principles to secure the tradition and mindset of Wudang.

Unfortunately, some schools misunderstand the form since they input a very aggressive factor which should not be there. You are not the tiger in the form and to prevent the stronger tiger, you must remain calm and focused on utilizing optimal speed and performance. When fighting a more powerful opponent, there is no room for mistakes and taking this form from a more aggressive perspective will defeat its purpose.

Remember the Wudang principles of attacking last but hitting first, overcome superior abilities with superior mastery. Stay composed and unaffected by the tiger’s appearance and let intuition drive your movements. During Fu Hu Quan the focus and speed are tireless; often confused with aggression but only a calm breathing and the prevention of unnecessary movements will give you the critical advantage in the precise execution and speed to overcome the tiger.

The Practical Taming of the Tiger

The Tiger represents a bigger opponent, much stronger and a due to his size a little slower. The thinking of the tiger is to use his superiority and attack as straightforward and efficient as possible. The Daoist, however, does not feel pressured and instead of losing opportunities to attack by stepping back, a practical distance must be kept. Students who train this form should have experience with the right distance in combat. Do not fight the tiger directly but keep your distance and attack the rotation-point of the tiger continuously. Where the attack originates, the tiger is most vulnerable.

Fu Hu Quan makes use of a constant shifting of your gravity center to gain a better attack angle and position, never taking a direct hit the form is full of evasive movements. Once the opportunity is there, the Daoist will attack continuously and do critical damage to the tiger removing his motivation to attack again.

The power of Fu Hu Quan comes from the right attack rotation, the fluid transition of body weight and attacks to balance your posture is the key to execute fast movements tirelessly. As the tiger finds himself unable to stop the barrage, the Daoist will eventually prevail.

Fu Hu Quan is of the internal martial arts, so a certain amount of Qi and mental control is critical. Students who want to learn Fu Hu Quan should have basic knowledge in Qigong, Taiji, and Gongfu.

Breathing (Qigong) is the most important aspect of maintaining focus during the movements. The oxygen levels drop drastically when the breathing is not trained enough.

Relaxation (Taiji) is important for the movements to accelerate. Having hard shoulders or to rigid posture, in general, will reduce the amount of speed needed for the form.

Basic Postures (Gongfu) like Mabu and Gombu are essential for beginners to master before learning Fu Hu Quan. Like no other form a powerful posture is necessary to maintain a stable stance during this quick and evasive movements. The student should not feel challenged to keep the low positions.

You can learn Fu Hu Quan in our Wudang Academy and in the online classes!