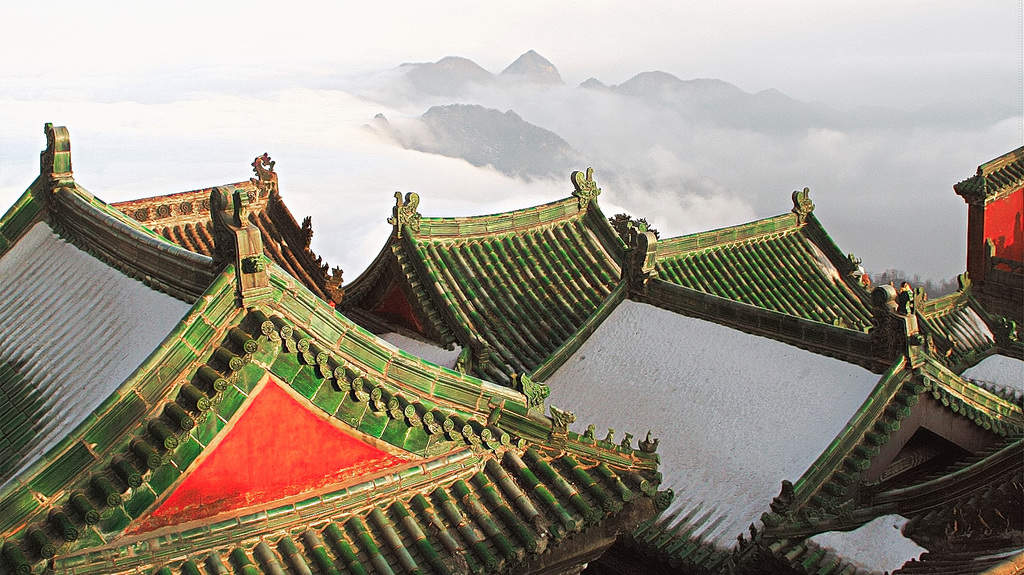 As a famous Taoist shrine, Wudang Mountain is located in Shiyan City, Hubei Province. Also called Taihe and Xuanyue Mountain, it is renowned for its magnificent ancient building complex and appealing natural landscape. In 1994, the Ancient Building Complex on the mountain was included on the World Heritage List by UNESCO. Besides, the mountain is said to be the birthplace of the famous Chinese Wudang Martial Arts.

Construction of the Ancient Building Complex started in the Tang Dynasty (618-907). During the reign of Emperor Taizong, the Five Dragon Ancestral Temple was built on Wudang Mountain. In the Ming Dynasty (1368-1644), about 33 palaces and structures including the Yuxu Palace, the Grand Purple Cloud Palace, the Yuzhen Palace and the Palace of Harmony were built. Then the grand and magnificent building complex was formed. At present, the existing building complex includes the Palace of Harmony, the Grand Purple Cloud Palace, the South Cliff Palace, the Yuzhen Palace, relics of the Yuxu Palace and the Five Dragon Ancestral Temple, Xuanyue Gate (a massive archway) and the Fuzhen Temple.

Situated on the south section of Tianzhu Peak, the Palace of Harmony is composed of the Golden Palace (Golden Peak), the Forbidden City and the Gutong Hall. The Golden Palace is the most celebrated. Constructed of bronze, the palace is about four meters (13 feet) long, three meters (10 feet) wide and six meters (20 feet) high. In the hall stands the statue of Emperor Zhenwu in the shrine with Golden Boy and Jade Girl, and two generals of Fire and Water attending him on the left and right. It is said that the statue of Emperor Zhenwu is about ten tons (22,046 pounds). Above the shrine is hung a golden plaque with four Chinese characters ‘Jin’, ‘Guang’, ‘Miao’ and ‘Xiang’ written by Kangxi, an emperor in the Qing Dynasty (1644-1911). Through the ages, the palace still presents its glamor and grandiosity.

Located below Zhanqi Peak, the Grand Purple Cloud Palace is the most magnificent and best-preserved Taoist building on Wudang Mountain. Covering an area of 6,850 square meters (two acres), the palace consists of the Dragon and Tiger Hall, the Stele Pavilion, the Shifang Hall, the Parents’ Hall, the Grand Hall of Purple Cloud Palace and other buildings. Covered with blue glazed tiles and yellow and blue carvings on the roof, the Grand Hall is the most representative wooden structure on the mountain. In the hall is worshiped the sculpture of Emperor Jade which was made by a Ming Dynasty artisan.

The South Cliff Palace is situated on the Duyang Cliff. It has the Tianyi Zhenqing Hall, the Two Bearings Hall, the Eight Diagrams Pavilion, the South Heaven Gate and the Flying Cliff. Built in the Yuan Dynasty (1271-1368), the Tianyi Zhenqing Hall is the most renowned. All the beams, pillars, doors and windows were carved from stone. This stone palace is a masterpiece of Chinese stone carving.

The Yuzhen Palace, the relics of the Yuxu Palace and the Five Dragon Ancestral Temple, Xuanyue Gate (a massive archway) and the Fuzhen Temple are also must-sees on the mountain. Also, many sculptures, offerings and sutras in the palaces, tablets, and inscriptions on the cliffs are precious relics and worth a visit.

The mountain is also celebrated for its appealing natural landscape including 72 peaks, 36 rocks, 24 streams, 11 caves, nine springs and three ponds. At any time of the year, tourists can enjoy its magnificent natural scenery.

How to Get There:

By train: Take a train from Beijing, Shanghai, Chongqing, Guangzhou, Nanjing, Qingdao, Wuhan, or some other cities and get off at Wudangshan Station. Transfer to intercity bus no. 202 or 203 to the scenic area directly.

By bus:
1. From Shiyan: Intercity bus no. 202 can take visitors from Shiyan Railway Station to the mountain within 70 minutes.
2. From Xian: Two direct tourist buses to the scenic area are scheduled at the Provincial Bus Station opposite Xian Railway Station, leaving at 09:00 and 15:00. It takes around 4 hours.
3. From Wuhan: One direct bus is available from Jinjiadun Bus Station, departing at 13:40 daily. It takes around 6 hours and costs CNY179/person.

By air: Tourists can fly to Wudangshan Airport from Xian, Tianjin, Kunming, Wuhan, and Hangzhou. Then take a taxi to reach the mountain at the cost of CNY60-80.