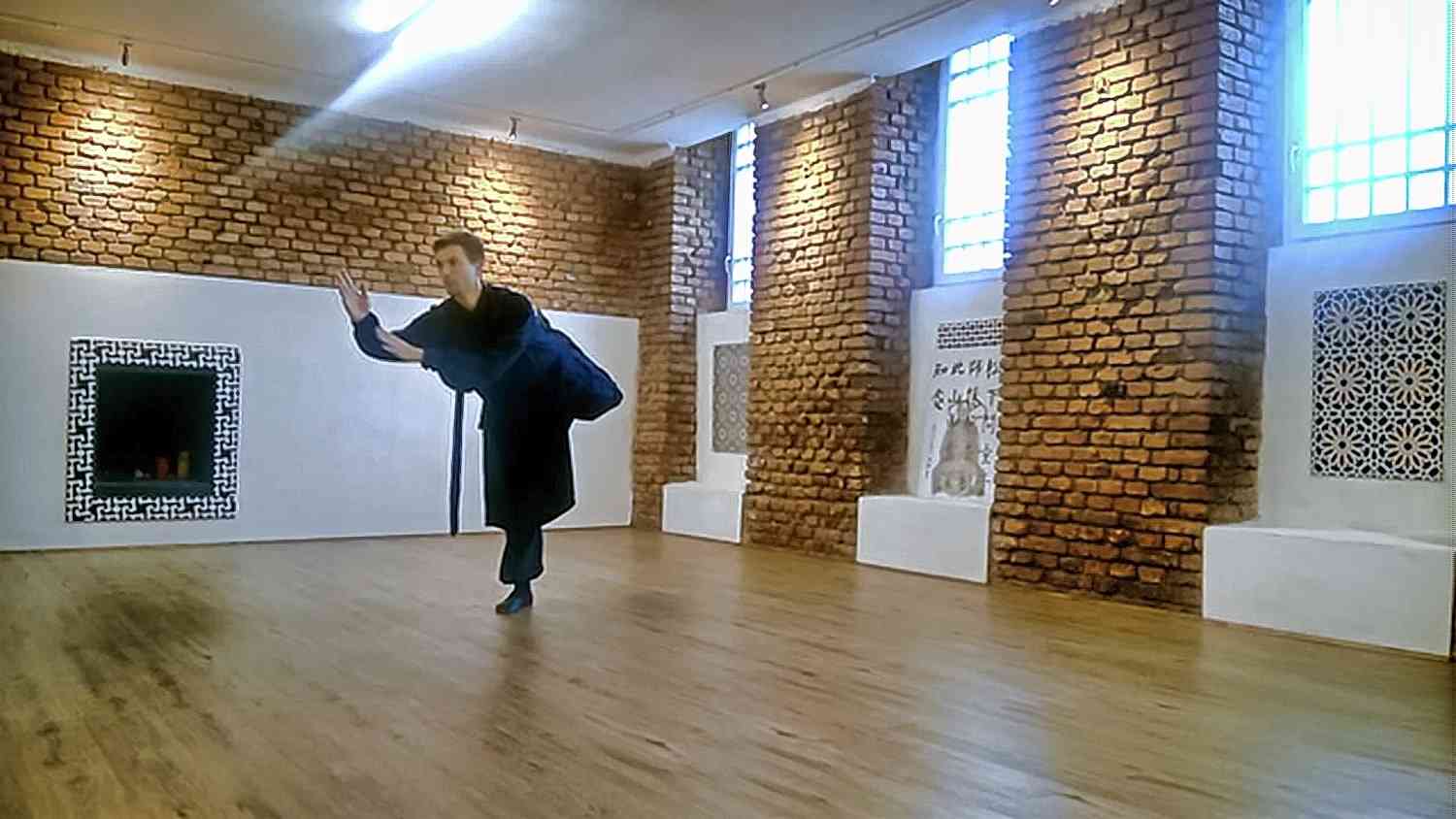 Wudang martial arts on Wudang Mountain today are a compilation of remnant bits and pieces from around China. One of the boxing methods considered pure and representative of the Wudang System is known as Taiyi Wuxingquan.

Taiyi Wuxing Quan (太乙五行拳) or in its full name  “Wudang Taiyi Qin Pu 23 Postures” (武当太乙擒扑二十三势) or Liangyi Quan (两仪拳), this set of Wudang Practice was practiced and popularized by Aisin Gioro Pu Xuan (Jin Zitao), who studied at Zi Xiao Gong (Purple Palace) and was taught by Daoist Priest Li Helin (李合林, 16th Generation of Wudang Long Men Division, disciple of Xu Benshan). It is also said that the set was created by 8th Generation Wudang Long Men Master Zhang Shouxing (张守性) in the Ming dynasty during the Hongzhi years (1487-1505). He is said to have based the style on the integration of Hua Tuo’s Five Animal Frolics and traditional Taoist DaoYin exercises.  While good for health cultivation it is also a specific method of combat. Taiyi Wuxing Quan emphasizes the neutralization of power, using leverage and balance towards incoming force, applies grappling and vital point cavity striking together to overcome opponents.

Jin Zitao was born on the 26th July 1906 in Beijing (Xuanwu Gate) to the Royal Manchurian family. He was six months younger than Pu Yi (Better known as the Last Emperor) and a year older than Pu Jie. His mother was from the Mongolian Noble family and one of the royal concubines. Jin Zitao would see his father only once or twice a month. In 1910, he was allowed into the palace of the Empress Dowager where he resided for more than three years as the study companion to Pu Yi. He returned to his mother side in 1914 (9 years old).

Unfortunately, his character was not stern to function as an imperial official, and after gaining a post, he found it very challenging. He resigned from his position and was rejected by his wife, with constant conflict and left in 1916. He traveled with his mother and carer across Tianjin, Shanghai, Yueyang, Lanzhou and Hangzhou visiting relatives along the way. His mother and carer then passed away. In 1924 he got married but soon after he was cheated in business suffering economic setbacks, while his wife died giving childbirth. After such a tragic and depressed life, he wanted to become a monk or hermit and in 1929 ended up on Wudang Mountain. He studied boxing and learned more about Daoism.  Afterward, he continued practicing daily his Taiyi Wuxing Quan. In 1938 he converted to Daoism. After the founding of New China, he was hired as a technical assistant to the Shanghai Yue Opera, also imparting martial skills as well.

Jin Zitao is said to have learned the Wudang Taiyi Wuxing Boxing during his short stay (~ 7 months) at Wudang in 1929 under the guidance of Li Heling (1898 – ). It was not until 1980 that the world would see the demonstration of this unique boxing method at the National Wushu viewing, emulating and communicating Congress in Taiyuan City, Shanxi Province. Before that occasion, many had heard of Wudang boxing, but few had seen it. Jin Zitao became more well known as a result afterward.  In the 1980’s Jin Zitao travelled to Wudang for a few weeks each time to teach the local (wider Danjiangkou/Shiyan area) martial artists there, of which Zhao Jianying and Yang Qunli, who became well-known inheritors of the Skill and in many cases cared for the training of the group whilst Jin Zitao was away. The group consisted predominantly of Coaches from Hubei Province.   Jin Zitao also taught students in his hometown (Huzhou, Zhejiang Province) which included local enthusiasts such as Fei Shengxiang and some from more distant areas such as Shanghai. In addition to Zhao Jianying and Yang Qunli, other martial artists had learned the method. In many cases, while Jin Zitao was not at Wudang, Zhao Jianying and Yang Qunli would take care of the groups with intensive sessions when Jin Zitao visited. Fei Shengxiang was a student of Jin Zitao in Zhejiang who studied many martial arts and was a part of the Zhejiang Provincial Wushu Team.

M. Zhao Jianying (1929-2011) was a significant contributor to Wudang martial arts. She was a key proponent of Taiyi Wuxingquan and taught very many followers during her lifetime. M. Zhao as a child suffered severe illness. One day a soldier noticed her bad health and offered to teach her martial arts to strengthen her body. She studied Hong Quan and got her body back to health. In 1980 at the National Wushu gathering, she met Jin Zitao and became his student acquiring full knowledge of Taiyi Wuxingquan and its associated exercises/methods. She also learned Bagua and Xingyi from Sha Guozheng and Lu Zijian, in addition to various weapons sets such as Taiji Sword and 8 Immortals Sword. Her son, Tan Xianping is also a well-regarded practitioner today.

Details of the Taiyi Wuxingquan

The key set consists 23 postures/methods  (25 including start and ending), with about 81 movements. There are small delicate circles worked throughout at compact, slow and precise manner.

Within Wuxing Quan, the five elements are emphasized such that:

From White Ape exists cave until Rein the Top belongs to Metal (Jin) ; From Dragon in confusion until Roc spreads its wings belongs to Water (Shui); From Spotted Deer Picks the Herbal Medicine until Eagles flying in the air and dancing belongs to Wood (Mu); From Immortal cranes Flying in the Air until Black Bear Turns its Palm belongs to Fire (Huo); From Cicada losing skin until Dragon returns to the sea belongs to Earth (Tu)

In stillness the foundation is sourced, It is softness which is the key shape, Spirit is held, and the Intention is steadfast ; In Stillness so movement originates, It is softness that overcomes hardness,  Focused on Intention not focused on muscular strength ; In movement still seek stillness/calmness, Within calmness, seek movement, place emphasis on Intention not on the shape; Intention, Qi, Jin (power) and Shape. Heart and the breath pursue each other mutually, Apply transformation/neutralizing Power rather than hard resistance; Right position is a matter of extreme precision within a few inches, Movement would emphasize grappling/locking and sealing of the breath.

The body should sink into place, the frame should be compact and tight; Waist follows the hips in turning, shoulders and hips are mutually matched; Both hands rounded in embrace, feet move in arched (curved) lines; Gentling twining cotton, move in circular motions with softness; Move like a snake, soft like silk reeling.

Breath is natural, the whole body relaxed and loose. The heart is calm while the mind is aware. Spirit is risen and actively alert; Internal and External combine, part by the part they are interlinked. Apply the Yin and Yang cycles of movements; the body method remains in central equilibrium; If intention arrives, Qi will come, Qi moves with the intention. As everything combines the spirit shall be nurtured; Mysterious eight channels are activated through the whole body. Taiyi Wuxing its most important aspect is on Health Cultivation.

It could be said that since GM Jin Zitao stayed at Wudang for only seven months, the Taiyi Wuxing Quan might be considered primary. With so many followers and practitioners today, many which are more modern in interpretation one may overlook the beauty of Taiyi Wuxing Quan. However, the secrets of the method lie in understanding the principles, applying them in practice and researching the combat and health nourishing benefits in details. Then just like GM Jin Zitao one may grasp the beauty of Taiyi Wuxing Quan which would allow its sole practice for a lifetime.