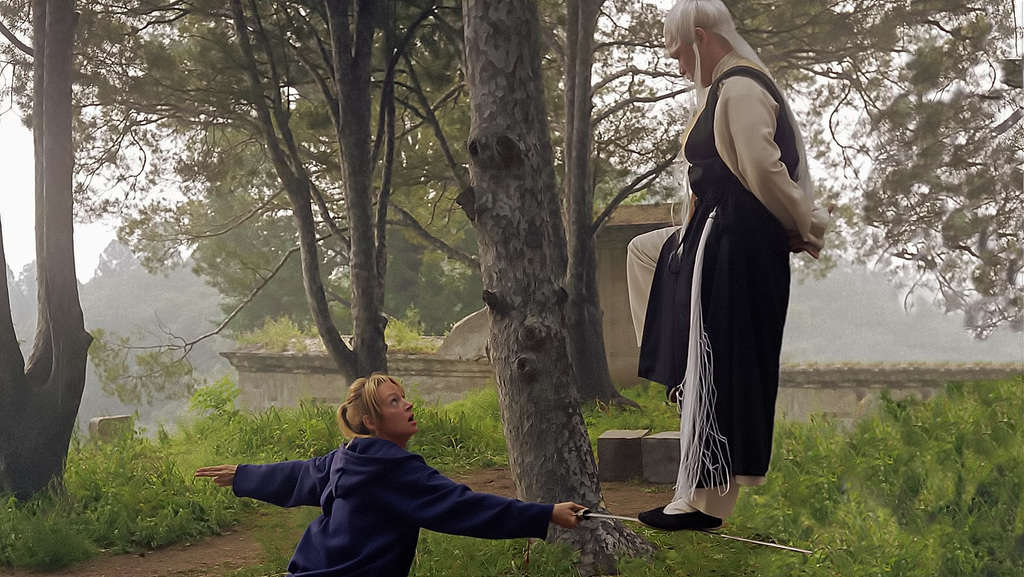 Wudang Kung Fu is one of the two most typical styles of traditional Chinese martial arts, the other being Shaolin. It’s a famous saying in China that “In the north, Shaolin Kung Fu is king; yet in the south, Wudang Kung Fu rules.”

Unlike its northern counterpart, which is known for its “external” form of martial arts and integration with Zen Buddhism, Wudang Kung Fu is an “internal” martial art based on the philosophy and canons of Taoism, an indigenous Chinese religion.

Wudang Kung Fu is named after the Wudang Mountains, a sacred center of Taoism and home to a complex of famous Taoist temples. Located in central China’s Hubei Province, just south of Shiyan city and north of Shennongjia Forest, a UNESCO World Heritage Site, the Wudang Mountains are considered by Taoists as an ideal place in the country to achieve Taihe or “great harmony,” the pinnacle of Taoism.

The first Taoist temple, Five Dragons Temple, was built here during the reign of Emperor Taizong in the Tang Dynasty (AD 618-907). Further structures were added in the following centuries, particularly under the sponsorship of Chinese rulers who were devout Taoist followers themselves, such as Emperor Yongle of the Ming Dynasty (1368-1644).

Soon, Wudang Mountains drew many believers to practice Taoism here. One of them was Zhang San Feng, a legendary 12th-century Taoist figure and the man widely credited with founding Wudang Kung Fu.

There are various historical accounts of Zhang San Feng’s life. One tradition claims that he was born in Shaowu in southeast China’s Fujian Province in 1247 and lived for more than 200 years. He is said to have served as a government official for a short period in his youth, but later left his office and gave away his wealth and began to travel the country as an ascetic.

Zhang San Feng eventually settled in the Wudang Mountains and lived there as a reclusive Taoist priest, healer, and sage.

The internal and external are key concepts in traditional Chinese fighting arts. The difference is the source of energy applied.

For instance, a fighting movement may be exercised by external muscular and structural forces, or by controlling the circulation of an inner force called chi (“life energy”), which can be accumulated by physical and spiritual exercise and flow through a relaxed body.

Zhang San Feng’s Tai Chi Chuan and Wudang Kung Fu were allegedly created according to Taoist ideology, which holds that the Tao, the everlasting source, pattern and substance of everything in existence, suggests naturalness, simplicity, spontaneity as well as softness, quiet, unification and harmony. And these elements are present in the movements and skills of Wudang Kung Fu.

The initial purpose of Zhang San Feng’s Wudang Kung Fu was to maintain fitness. The movements and expertise of Wudang Kung Fu were designed to improve blood circulation, relax muscles and joints and cultivate physical and mental health.

Later, it also became a fighting art for self-defense. Its strategy is to fend off hard attacks with soft movements, defeat the strong in a yielding way, confront the active with stillness, slowly beat the fast and strike out only after an opponent has come first. It emphasizes defense rather than offense. This principle is because Taoism promotes peace and harmony, rather than conflict; so Wudang Kung Fu is meant for protection, not destruction.

Ba Gua Zhang, literally “Eight Trigram Palm,” is named after the trigrams of “I Ching” or “Classic of Changes,” an ancient Chinese divination text and one of the key ideological foundations of Taoism. Circle walking is the customary movement of Ba Gua Zhang.

Xing Yi Quan, which translates literally to “Shape-will Boxing,” is the oldest of the Wudang internal martial arts. It concentrates on the mind and the shape of the body, rather than physical strength and heavy-handed force. It is primarily composed of five basic fist movements; all exercised at short range.

Some documents indicate that Xin Yi Quan was created in imitation of the fighting techniques and spirit of 12 animals — such as the tiger, monkey, snake, eagle, horse, and bear — to tap into the natural instincts and fighting abilities those animals possess.

Wudang Kung Fu remains popular in China today, and like its northern counterpart Shaolin Kung Fu, it is also being practiced in many other places around the world. In 2006, Wudang kung fu was written into China’s first national intangible cultural heritage list.