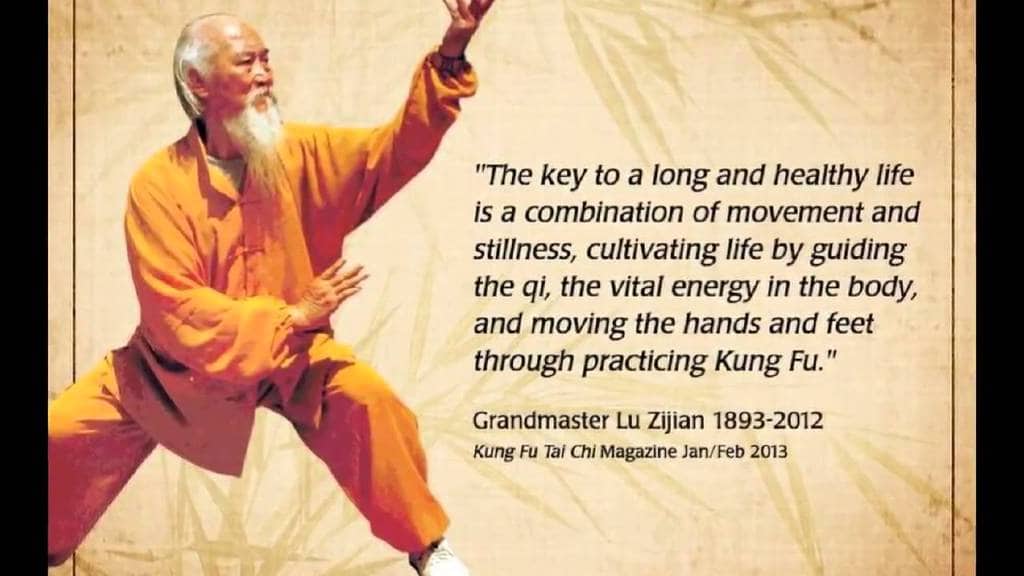 Lu Zijian was well known for his high achievements in internal martial arts, Taoist alchemy & Qigong, Chinese Traditional Medicine and Chinese Traditional Painting. As a result of these excellences all converging in the same mind and body, Lu Zijian reached the age of 118 years full of vigor and a bright spirit.

He started at his young age to study wushu with his mother, and later he was accepted as a disciple of Master Jiang Yin then he studied at the State Medical School of Hubei Province.

1911: At 18 Lu went to Beijing, he studied Baguazhang with Master Li Chang Ye and Xingyiquan with Master Yu Shirong, and finally he returned in Chongqing Sichuan Province to study Taijiquan with Master Li Guo Chao. (Most probably due to the political instability leading to 1911 Chinese Revolution).

1920: he was a Gold medalist at the Nanjing Yuhuatai Martial Arts Competition at the age of 28.

1929: He was actively against a proposal passed by the Central Ministry of Health of the new Kuomintang (KMT) government severely limited the advertising and practice of Chinese medicine. But finally this proposal was not implemented, and he was part of the Commission for Chinese Medicine Organization. At that time he was in Chongqing as Martial Arts Chief Instructor and a member of the KMT Military Committee.

1979 He is back in Chongqing et was Municipal MCPPCC member. This year he opened his Yudan Zijian Martial Arts Academy as well as the Lu Zijian Chinese Medicine Orthopedics Clinic. He published several articles and books among them “Baguazhang Healing methods” and created his “Baguazhang Hunyuan Yangsheng Gong.”

2007: Lu Zijian on the 24th January became the Oldest man in the world.

2009: Lu Zijian on the 2nd January became the oldest person in the world and was 116 years old.
2012: On 21 October Lu Zijian died surrounded by his family and closest friends one month before his 119th anniversary.

Huo Yuan Jia was not only a very famous martial artist of his time, but Lu Zijian and Late Great Master Huo have sworn brothers with Huo being the elder brother. They fought together with the  monopolistic influence of Foreign freight companies deserving first the Yangtze river then later in Shanghai. Then they join Chinese Resistance against Japanese troops. He killed three Japanese Martial arts experts in duels. During of the raids they launched against the Japanese forces, Lu’s wife was murdered. He used one single palm to kill one Foreign boxer named Marshall. The name of Lu Zijian grew very fast so that Chiang Kai-shek (Jiang Jie Shi) the Chinese military and political leader who was leading the Kuomintang (KMT) appointed him as one-star general and Head Bodyguard (General Chiang had thirteen top bodyguards, all of them were his disciples).

While China’s Liberation Lu did not follow the major of Chiang’s remaining troops in Taiwan, he chooses to stay in Mainland China; he stayed in a labor camp up to 70’s. But later he held progressively important posts such as President of Chongqing North-South Wushu Federation, Martial Arts Chief Instructor of the We He Chongqing Headquarters, Chairman of the Association of Chongqing Traditional Chinese Medicine, President of Sichuan Province Martial Arts Association, Director of the Chinese Martial Arts Research Institute…

In 1982 he was Gold medalist of the Gold Lion National Martial Arts Tournament.  He received a special Gold Award in 1984 at the Emei Mountain Boxing Tournament. 1985 appointed President of the International Gongfa Association. 1994, the Chief Adviser of the International Qigong Association, in 2000 he received the gold medal Senior People from the Chinese State Administration of Sports. The Chinese Ministry of Sports, Department of Martial Arts attributed him the title of “Leading authority of Chinese Martial Arts” and rewarded the highest rank of Nine Duan in 2002. He was the Honorary President of the Chinese Wudang Wushu Federation.

His contribution as Expert in Chinese Medicine Treatments for Bone Injuries is widely recognized as he treated numbers of patients in whole China successfully.

Besides his pedagogic skills, his chivalric and generous temperament leads him to nurture thousands of disciples including foreign students, some of them are even very famous and own their martial arts schools, perpetuating the “Zijian” style martial arts. All are under the head organization of Mr. Wang Qinghua. In 1986, he was hired as Principal Consultant International Qigong Society. In the same year, he was appointed as Vice president of the Wudang Martial Arts Development Center of California General Counsel. Since the implementation of the national Wushu Duan ranking system, Lu was involved in the long-term task to revise the teaching and training in Chinese martial arts with all the other 9 Duan top ranking experts of Chinese Martial Arts.